– Extreme poverty is rising more now than it has for the last 20 years.

– It works with families in a structured way for two years, to improve their situation in terms of health, education, housing, income generation and citizenship.

Hundreds of millions of people live in poverty: from the shantytowns of South America to the slums of Africa and Asia. These vulnerable people urgently require decent housing, education, job opportunities, access to government services and medical care. Where to start?

In addition, extreme poverty rose in 2020 for the first time in more than two decades as the COVID-19 pandemic pushed an additional 88 million to 115 million people below the threshold of living on less than $1.90 a day, according to the World Bank.

That means more families who were just about managing before the pandemic will struggle to put food on the table and keep a roof over their heads as unemployment bites deep.

Many will be unable to withstand the “health shock” of a family member falling ill – a risk that was already very real and is even greater as coronavirus stalks overcrowded slums across the developing world.

Tackling the inter-linked challenges of poverty and health starts with a recognition that it is no good simply treating patients’ medical problems in isolation. Breaking the spiral of deprivation means addressing the underlying social determinants of health – whether that is bad housing, lack of education and training, or inadequate information about social services.

But a blueprint now exists for addressing this matrix of problems and it can be done at scale – at local, regional and even global levels.

One institute, five lines of attack
An initiative by the Dara Institute was built out of seeing one too many children from the favelas of Brazil being admitted to hospital for treatment, being discharged home, and then being re-admitted a few months later – often dying.

The reasons for this were not hard to fathom: if children are sent back to the same sub-standard living conditions that triggered their initial illness, there is every chance they will return to hospital – and that next time they will be even sicker.

The efforts of doctors in hospitals and clinics are of little use unless society also tackles the fundamental issues of malnutrition, poor sanitation, and damp and smoky housing. These lead to sometimes-fatal cases of pneumonia, asthma, gastrointestinal disorders and other diseases.

Rather than focus on one issue, a multifaceted and long-term approach that takes account of all the needs of poor urban families is in order.

For nearly 30 years, the Dara Institute has been working to build a bridge between hospital care and families in their homes.

It has now developed a standard methodology – a kind of social technology – that provides support in the five key areas of health, education, housing, income generation and citizenship. Rather than imposing solutions from the top down, a plan (Family Action Plan, or FAP) is drawn up in conjunction with family members, with support typically provided for two years.

The proof is in the case studies
Women like Angel Silva, a 28-year-old from Santa Cruz to the west of Rio de Janeiro, are living proof the system works. She not only received help to feed her malnourished child but also got assistance when her home was devastated by floods. Since then she has gone on to train as a baker and she now runs a small business, Angel Cakes.

Over the years, this FAP strategy has spread to 23 locations across Brazil and has even been adopted as public policy in Belo Horizonte, the capital of the state of Minas Gerais. The lives of 75,000 Brazilians have been directly affected by our action plans, which typically cost around 900 reais ($170) a month to run.

There is hard data to demonstrate that this is money well spent. A study by researchers at Georgetown University found significant and sustained improvements in health and financial security among families graduating from the scheme, with incomes almost doubling and hospital readmissions falling by 86% three to five years after they had concluded their FAP.

What’s more, the number of families owning their home rose from 28% to 50%.

Positive knock-on effects: from families to the world
By empowering families to improve their own lives – through providing advice on everything from nutrition and healthcare to professional training and legal services – the benefits are also cascading throughout communities.

Cristiane Eusébio, 48, a resident of São Pedro da Aldeia to the east of Rio de Janeiro, has been engaged in a FAP since 2019. During the pandemic, Cristiane created a local network of women living in similar conditions and was able to assist several families in accessing government benefits. 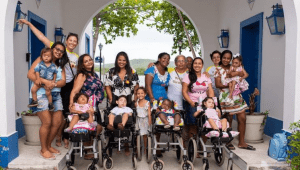 The message is also spreading beyond Brazil. The University of Maryland has embraced the same FAP methodology and is applying it at the community level in deprived areas of Baltimore. The general principles set out by the Dara Institute have been taken up by other social entrepreneurs too, and exported to four continent.

Without a joined-up approach an endless cycle of deprivation rules, since poor housing spells poor health – particularly for children. Illness all too often tips families into devastating poverty.

It is possible to provide family-focused solutions to poverty and ill-health, and to do it at scale. The new challenge is for others the world over to roll out these initiatives. They are needed now more than ever as the long shadow of the pandemic clouds the economic prospects of millions of the world’s poorest and most vulnerable families.